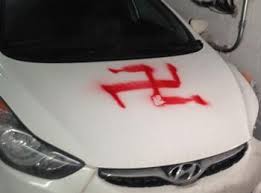 In recent weeks all political parties in the Quebec National Assembly expressed solidarity with the Quebec Jewish community and unanimously passed a motion condemning the recent wave of anti-Semitic incidents in Europe and Montreal.

In an underground garage in a Montreal suburb, cars were vandalized with swastikas and envelopes containing bullets and threats were placed on their hoods. Members of the Jewish community, especially Holocaust survivors, were shaken and horrified by this hate crime.

When Holocaust survivors witness politicians condemning these racist activities and supporting the Jewish community, it reassures them that the political situation is different today than in the 1930s. Survivors realize they are not alone and have allies in denouncing these events. Public expression of support and solidarity with the Jewish community helps appease survivors fears and anxieties, and brings them some comfort.

I observe that Holocaust survivors respond to anti-Semitic events in different ways. Some become distressed because they are reminded of the prejudice against Jews and acts of violence that spread throughout Europe before the Holocaust. They are afraid current anti-Semitism will lead to another Holocaust. These survivors suffer in silence and experience anxiety, fear, withdrawal, nightmares and sleeplessness. Others are worried, not so much for themselves, but for the harm that may befall their children and grandchildren. In the words of one survivor, “I don’t want my children to live through what I experienced in the Holocaust.” Still others become angry and strengthen their resolve to educate others about the early warning signs of genocide and its prevention. For them “Never Again” is not an empty slogan. They write memoirs and books, give oral testimony, make documentary films and speak to students and other interested individuals about their personal experiences. They speak passionately about their hope for a world that is free from racial intolerance, bigotry and hatred.

It is important for service providers to identify vulnerable survivors who are disturbed by anti-Semitic events and provide them with support in the following ways:

The Health Benefits of Nature