The Lady in Number 6 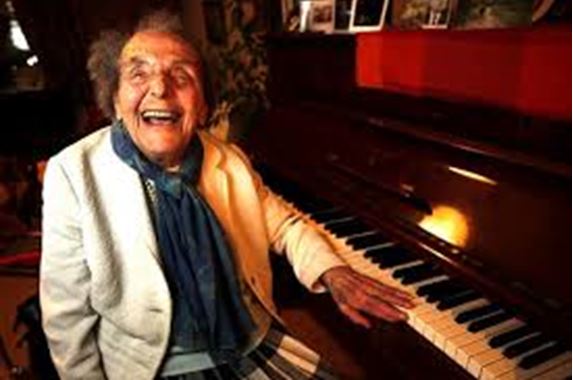 Malcolm Clarke’s film, “The Lady in Number 6: Music Saved my Life,” is short-listed in the documentary short subject category at the upcoming Academy Awards this March. It’s based on the life of 109-year-old Holocaust survivor Alice Herz-Sommer who performed in over 100 concerts at the Theresienstadt concentration camp. This camp was established near the Czech city of Prague by the German Nazis in 1941. The concerts were used as a propaganda tool by the Third Reich to conceal the camp’s true function: a collection center for deportations to ghettos and killing centers in Nazi-occupied Eastern Europe. Theresienstadt musicians performed in concerts even though the living conditions were horrible and they were threatened daily with deportation. (link to United States Holocaust Memorial Museum)

As I watched the film, I was awed at how Mrs. Herz-Sommer has managed to overcome adversity, find joy in life, and create beauty. Her mother and husband were murdered at Auschwitz and her son, Raffi, died suddenly in 2001. In spite of these losses, she lives each day with passion and hope. Music was an important part of her life growing up and it sustained her during the Holocaust. It continues to provide her with meaning and purpose today. Her love of life and positive attitude inspire me. Why are we drawn to her story? We are inspired by it because people like Mrs. Herz-Sommer, who have experienced the dark side of humanity, are role models that give us hope that we can also deal with challenges that come our way. When we recognize the resilience of these individuals, we are reminded that we can also be resilient.

There is a term in the literature called “vicarious resilience” that is used to describe the positive impact that survivors of severe trauma can have on mental health professionals who work with them (Hernandez et al. 2007). Some professionals describe drawing inspiration and strength from their clients’ experiences, putting their own problems into perspective, and applying what they’ve learned from their clients in their own personal crisis. This phenomenon has a far-reaching potential, beyond the mental healthcare community, that can be introduced to anyone who is struggling to reclaim their lives after tragedy and adversity. There are times when everyone needs “air blown into us” (Latin root of word inspiration) by role models who demonstrate by example that, in spite of tremendous suffering and losses, life goes on and can be lived again in a meaningful way. Mrs. Herz-Sommer is an inspirational role model.

Link to The Times of Israel